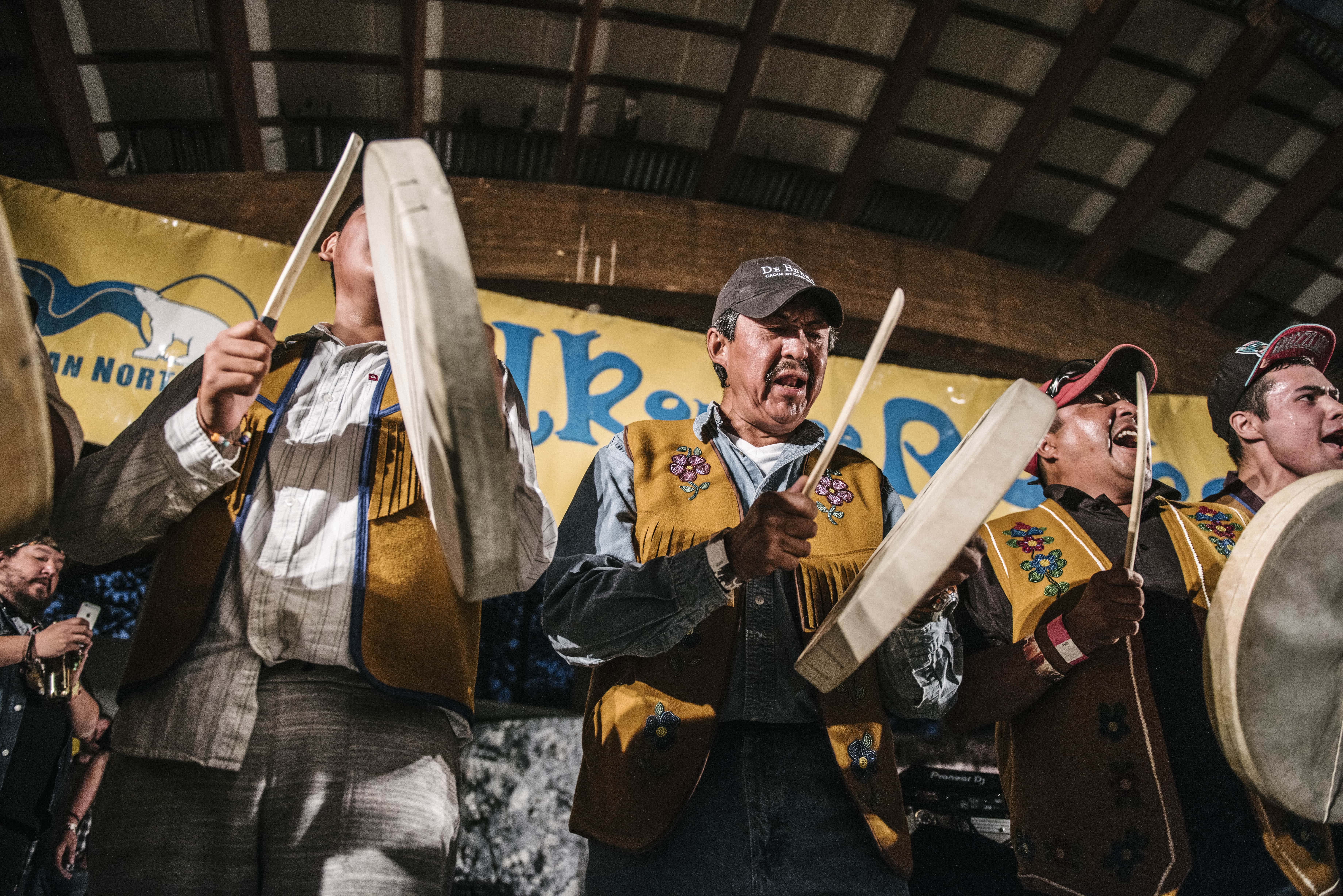 Yellowknife’s small but active cultural scene is responsible for a busy year-long schedule of music, visual arts and performances throughout the city, including a host of regular festivals and events. There are two major cultural institutes — the Northern Arts and Culture Centre and the Prince of Wales Northern Heritage Centre — plus dozens of commercial galleries, artists-run groups and guilds. And the community is extremely open to newcomers and new ideas — it’s easy for new arrivals with an artistic flair to join up with a local arts group and start having an impact on the city’s cultural life. The City of Yellowknife, which has a collection of local art you can see on the walls of City Hall, has a fairly comprehensive registry of local arts groups and initiatives, but you can find some of the highlights of the local scene below. Folk on the Rocks
This annual music festival is now in its fourth decade at its idyllic lakeside location just outside of town. Held in mid-July, it’s perhaps the city’s biggest social event of the year, drawing in Yellowknifers and visitors of all ages with its eclectic roster of musical acts, along with a children’s stage, a beer garden, plenty of food, and crafts as well.

NWT Pride
The NWT’s only LGBTQ festival, NWT Pride takes place at multiple venues in mid-August every year, including a 19+ event at the Folk on the Rocks beer, Garden, plus workshops, parties and Queerlesque shows in the city.

Snowking Festival
A one-of-a-kind month-long festival that takes place in and around a castle built entirely out of snow and ice on Yellowknife Bay every March, the Snowking event features eclectic programming with musical acts, art exhibits, children’s theatre and much more.

Indigenous Day/Summer Solstice Festival
Every June 21, Somba K’e Park in downtown Yellowknife hosts music performances and celebrations of both the summer solstice and the national Indigenous Day holiday, including arts and crafts and a fish fry.

Yellowknife Farmers Market
The dozens of stalls at the Farmers Market, held every Tuesday after 5 pm in Somba K’e Park, also include the work of local artisans and artists. The Fireweed Studio, home to the Yellowknife Guild of Arts and Crafts, is also open during the market, featuring work from the guild’s members.

Yellowknife International Film Festival
YIFF brings circumpolar and relevant independent cinema to the city every year, providing an opportunity for Northern filmmakers to celebrate their work, and in partnership with the NWT Professional Media Association provides professional development and valuable networking events that have seen professional relationships grow into important mentors, collaborators and contacts in the national community.

You can also find a regularly updated list of upcoming events at EDGE YK’s Events Calendar. Northern Arts and Cultural Centre
NACC is the city’s largest performance space and the only fully equipped live performance theatre in the NWT, presenting theatre, dance and musical programming from northern, national and international artists. NACC also operate a variety of programs in communities throughout the NWT, from educational workshops to performing artist mentorships.

Prince Of Wales Northern Heritage Centre
The PWNHC is the North’s premier museum space, with a collection of permanent and rotating exhibits that explore Northern history, culture and the environment. It has a performance space and offers a wide range of education and public programming, as well as being home to the NWT Archives.

Aurora Emporium
This gallery in the Discovery Inn offers a selection of Indigenous arts and crafts, from paintings and sculpture to mitts and scarves.

Down To Earth Gallery
Situated in the heart of Old Town, Down to Earth is a funky artist-run art gallery, selling original Northern art created by NWT artists. The artists of the gallery also regularly offer various art workshops in different media. Artless Collective
A creative media studio best known for its video work,  Artless Collective are the driving force behind the Dead North film festival, and collaborate extensively with artists across the circumpolar world creating film, television and multimedia entertainment.

Music NWT
A non-profit association dedicated to helping develop and foster music and the music industry in the Northwest Territories, Music NWT holds an annual conference and promotes the distribution and marketing of work by NWT-based artists.

NWT Arts
NWT Arts is a registry of territorial artists and events, and offers resources for artists including a section that collects information about funding sources.

NWT Arts Council
NWTAC promotes the arts in the Northwest Territories, and provides recommendations to the Minister of Education, Culture and Employment on financial awards for creative artistic projects in the visual, literary, media and performing arts.

NWT Professional Media Association
A non-profit society, NWTPMA’s mandate is to create a sustainable media industry that generates economy in the NWT, by cultivating the professional growth of its members and influencing policy.

Yellowknife Guild of Arts and Crafts
A group of volunteer artists, artisans, students and teachers passionate about learning and sharing craft skills, YGAC was formed in 1946, and is one of Canada’s oldest craft guilds. Its primary mandate is to teach art and craft skills, and current media includes clay, fibre arts, stained glass and silver. During summer months, the guild operates Fireweed Studio in Somba K’e Park

YKARCC
The Yellowknife Artist-Run Community Centre is a non-profit organization dedicated to the production and presentation of Yellowknife and NWT artwork. It brings artists working in all art forms together, and encourages collaboration.